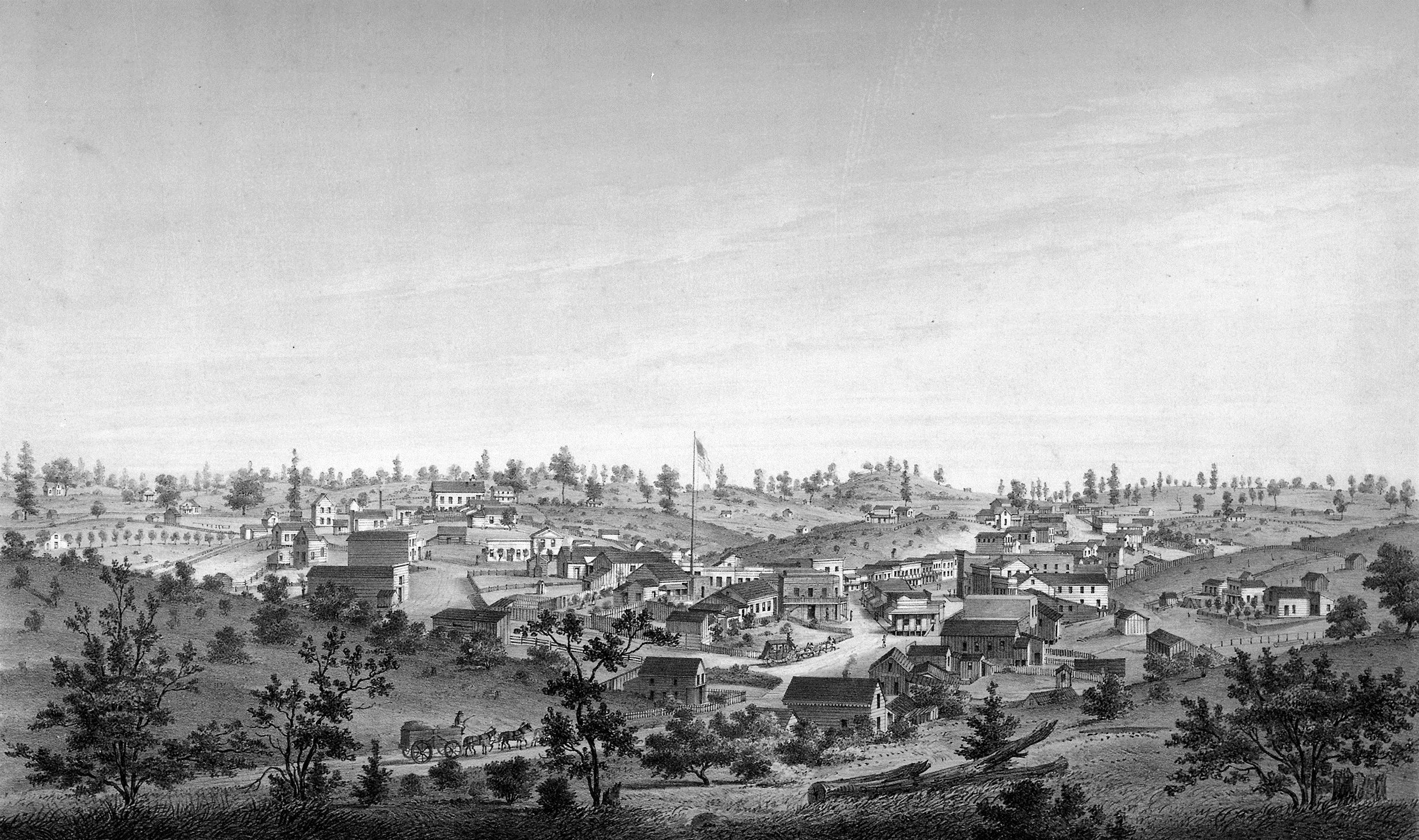 The gold camp of Auburn was much like the other early mining camps of Newtown (near present day Lincoln) and Elizabethtown (near Iowa Hill). All were founded on an initial gold strike and very quickly attracted miners, merchants, saloonkeepers and gamblers. Elizabethtown was settled in the fall of 1850 but was deserted by 1854. Newtown was founded in 1855 and within a few years it too had been abandoned. What made Auburn different? Why did it survive? As with the other two towns, the “easy” placer gold was soon played out and most of the miners moved on to the next “big strike” location. Auburn, however, maintained its population and grew to be the most substantial town in the County because of its selection as county seat and its location.

Claude Chana was the first to find gold in the Auburn area in May of 1848, about a quarter mile south of Old Town on the Auburn Ravine. Chana very quickly moved on. Nicholaus Allgeir with several Indian workers arrived next but they also didn’t stay long. Joe Woods and Tuck Warner came on the scene in late 1848 and found the extensive gold deposits at Rich Flat, near today’s Railhead Park. Gold was also found in Old Town in what was called the “plaza” where several ravines converged.
By the time Hiram Hawkins arrived in July of 1849 there were only a few miners still in Auburn. Two Chileans on Rich Ravine, a short distance from the American Hotel (Shanghai/Auburn Alehouse) and one miner on Auburn Ravine. Most fortune seekers had left the camp and headed for the rich strikes along the North Fork and Middle Fork of the American River.
The winter of 1849 was the turning point in Auburn’s history: its moment between slipping into obscurity and being listed in Gudde’s “Mining Camps of California” or becoming a permanent settlement. Many miners in the river canyons scrabbled to build more substantial cabins in the winter of 1849-1850 but most fled to the nearest settlement: Auburn. An anonymous writer drafted a letter to the Placer Times and stated: “This sudden visitation of the liquid element has entirely checked operations and taken miners all aback; and there being so few of the necessaries of life within their reach, it is thought there will be a general rush for this place (Auburn) and San Francisco very soon…” Placer Times Nov. 25, 1849
Merchants and hotelkeepers were quick to react to the influx of miners seeking shelter from the inclement weather. Several large public hotels were built. “‘They were built of logs and roofed with shakes…within each was a great fireplace, a bar, gambling tables, a kitchen and a boarding house.“

The miners were essentially stranded in Auburn during the severe winter of 1849-1850 as the rains came in deluges and the roads to Sacramento became virtually impassable. That same anonymous writer noted: “The roads are altogether impassable for teams and for packing, it requires all the vigilance of the driver to keep the animals on their feet. To get up and down the high hills… it is altogether impossible for four legged animals to “propel” at all.” Placer Times Nov. 25, 1849
One element that helped secure Auburn’s future was its location on the road coming out of Sacramento that connected with roads to the gold camps. San Francisco was the main port for incoming supplies and from there steamboats brought the goods as far as Sacramento and Stockton and as far up river as Marysville. William Gwynn, Hudson House and Walkup & Wyman, the early merchants in Auburn, began running freight wagons to Sacramento City. The round trip usually occupied three days, “one day in going down light and two days in coming back loaded.”
The route from Sutter’s Fort and later from the Embarcadero in Sacramento City to Auburn was the main trail into Auburn and then to the remote camps in the hills or on the riverbanks. In the earliest days, Auburn was found to be the furthest that a freight wagon could travel. Arriving at Auburn, supplies headed to the distant camps were loaded on to men’s backs or onto pack mules for the journey over steep, rocky, narrow trails. Freight charges for the trip were $10 per hundred pounds in good weather but skyrocketed to $30 to $40 in bad weather. John C. Boggs, later sheriff of the County, recalled that a barrel of sauerkraut that he paid $10 for in Sacramento City sold in Auburn that winter for $150. 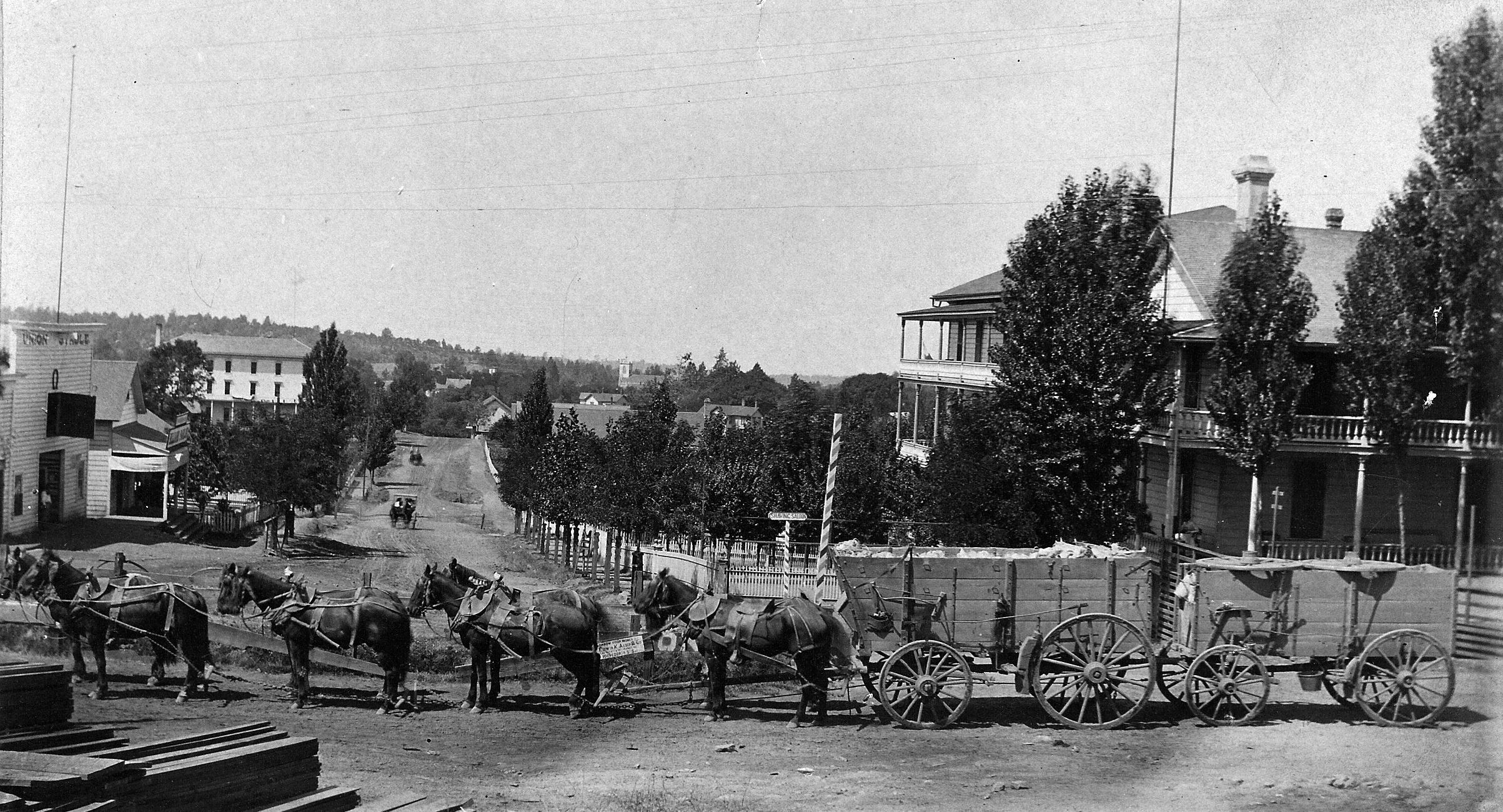 (Photo: The Freeman Hotel is on the right. You are looking down Railroad Street (now Lincoln Way) from near the present-day Gold Rush Museum at the old Depot. The wagons are filled with limes.)

Mexican muleteers were among the first to take advantage of the lack of roads and the need for transporting every type of provisions desired by the miners. Miners needed food, liquor, clothing, bedding, tools, medicines and hardware. Every conceivable item needed to be brought in and “pack trains were indispensable.” Mexican mules were considered far superior to mules arriving from the eastern states. Mexican mules were stronger, tougher and possessed more endurance. The average train consisted of 40 to 50 mules with two muleteers. Packing the mules was a painstaking job, sometimes taking hours. Balancing the load was critical as an unbalanced load could lead to the mule and cargo crashing down into steep canyons.

Within a few years the network of trails developed into roads. The terminus of wagon freight moved further into the county. Auburn maintained its preeminence as a transportation center because of the convergence of roads centered in town near present day Central Square. The first was the main road from Sacramento that ran through Auburn to Illinoistown (Colfax), approximately the route of present-day Auburn-Folsom road, the second branched off the Sacramento-Auburn road to Grass Valley and Nevada City, the third extended northeast to the camps on the Foresthill ridge, the fourth passed down Auburn Ravine to Ophir and Virginiatown, and the fifth connected with the roads coming down from El Dorado County.

The early roads followed the paths set by foot travel and the mule trains. Road building was difficult and expensive. Tremendous difficulties were encountered in transforming treacherous, threadlike pack tails into roads. Early roads required “a great expenditure of money and labor.” The lack of governmental infrastructure to fund road building led to the rise of private road building. “Toll roads became the foundation of commerce in the Sierra.”

In 1859 the Placer Herald estimated that nearly 200 hundred tons of freight passed through Auburn daily. In July of that year they reported: “As indicative of the immensity of the freight business through this place, we will state, that on Thursday morning twenty- eight loaded wagons, averaging four tons of freight each, passed through town on their way to the mountains, within less than two hours’ time.”
The gold seeker, after ”making his pile” was, interested mainly in two things: news from home and transporting safely the precious gold he obtained. The early Express Companies filled both these needs. Post offices were few in number and the mail slow and irregular. Sam Holladay, the camp’s first Alcalde, recalled walking from Auburn to Sacramento then taking a boat to San Francisco looking for any mail from home.

Among the first Express Companies in Auburn were Gregory’s Express and Hunter & Company. They were followed by Adams & Company and eventually by Wells, Fargo & Company. The express companies provided many services for the miners, they could not only send and receive mail on a regular basis but could transport gold with full insurance coverage. Auburn became the “express center for Placer County.” “The Express men of our town are now reaping a golden harvest. Thousands of dollars worth of dust are bought every week. Upon the rivers, especially, they make heavy purchases every few days.”Placer Herald Nov.12, 1853
John Q. Jackson, the 23-year-old Auburn agent for Wells, Fargo & Company wrote home in 1854: “What I have to do is quite confining, staying in my office till 10 at night, buying (gold) dust, forwarding & receiving packages of every kind, from and to everywhere, filling out drafts for the Eastern Mails in all sorts of sums, from $50 to $1000…”
Jackson forwarded over 750 pounds of gold to San Francisco in one month in 1854. He shipped 150 pounds at a time explaining that was “about as much as one likes to shoulder to and from the stages.”
As well as the Express companies, stagecoach lines were established very early in Auburn, and it became “the chief distribution point for the mines.” William Gwynn, a merchant, established a line as early as June of 1850. His stage ran three times a week from Sacramento City to Auburn.

Another factor that influenced the growth of Auburn was its designation as the Sutter County seat over Ophir, Nicholaus and Miner’s Hotel in 1850. By an election, thought to be influenced by ballot stuffing, Auburn became the county seat. A contemporary newspaper man R. J. Steele wrote: “The favorable location of Auburn, its preponderance of population and the inexhaustible powers of voting possessed by its citizens and partisans decided the contest in its favor by a majority considerably exceeding the entire population.”

Auburn remained the county seat for the newly formed Placer County in 1851. The amount of activity that centered in the courts and in the recording offices was astounding. A citizen of the county came to Auburn to file a deed, claim a homestead, or file a mining claim. Brands for animals were recorded, married women could record and declare personal property or the right to become a “sole trader,” business licenses, liquor licenses and gambling licenses were applied for at the County offices. All kinds of statistics were collected and recorded at the County Seat.

The courts for the county drew large numbers of citizens. A typical Court of Sessions trial in May of 1859 summoned jurors from all over the county. Men came from Foresthill, Brushy Canon, Yankee Jim’s, Iowa Hill, Illinoistown, and Todd’s Valley.
An additional element influencing the growth of Auburn was its reputation for tolerance and safety. Auburn, like all of the Gold Camps in the Mother Lode, was a place of massive cultural and ethnic diversity. One early miner wrote home that he had dinner at a French restaurant “that was run by a mulatto from Louisiana, who rented the building from a Jew, the meal was cooked by a Chinese cook, the drinks served by an Irish barman and the meal by an Australian waiter. Mexican women washed the linens, a Dutchman provided the meat, an Italian provided the vegetables and a Frenchman baked the bread.”
While Auburn may not have had this exact mix of cultures, the miner certainly conveyed the wide-ranging backgrounds of people in the early gold camps. The place names in the area also show the diversity of locations the men had left to come west: Iowa Hill, Michigan Bluff, Yankee Jim’s, Dutch Flat, Illinoistown, Spanish Flat, and Wisconsin Hill.
In many of the camps and villages, minorities were barely tolerated but in Auburn, there seemed to exist a mood of tolerance. The local Native Americans, while certainly having their way of life disappear, did not themselves disappear. When anti-Chinese sentiment was running high throughout all of California in the 1870s, the Chinese in the communities of Roseville and Rocklin, were run out of town in 1877, literally fleeing for their lives, while Auburn’s Chinese population remained relatively undisturbed.

Many of the gold camps were violent places, but in this regard also the village of Auburn exhibited a different behavior. There were few of the duels or lynchings that characterized many of the other early settlements.
Auburn, although stripped of its surface gold within months, managed to hang on and avoid the boom and bust cycle of so many other gold camps in northern California due to its location and its position as county seat.